Rex Whitehead in his ASTP uniform.

Rex Whitehead was sitting at the entrance of his dugout. This night of January 1945 on the Elsenborn Ridge was particularly clear and ice cold. He pulled the blanket covering his body above his head, leant forward to hide the burning end of his cigarette and took a long puff. Curled up in a corner, his foxhole buddy, Haskell “Hack” Wolff, was shivering in his sack. The night was a special moment of escape. Darkness made you feel more secure and the chilly breeze was bringing some relief from the musty stench of the log covered holes they called home. Rex pushed the blanket back and blew the smoke at a million bright stars.

His mind was at home, in Grace, Idaho, with his parents, Alvin and May, and his sister Eileen. The little town was nestled in a charming valley of Caribou County in southeast Idaho. On April 28, 1944, Rex had turned 19 and had joined Company H, 394th Infantry after his ASTP class at Arkansas State University was disbanded. Less than nine months later, he had seen combat, death, misery and was a combat veteran. Rex stayed with Company H throughout the war and was discharged in 1946. He used the « GI bill » to continue his studies and came back to Grace to work in a bank alongside his father. He later moved to Logan Utah, where he worked for an insurance company. He had married Paully and raised three girls, Robyn, Lane and Carolyn. The war was way behind when he heard again about the 99th Infantry Division and its association. He immediately joined to regain contact with old brothers in arms.

When the MIA Project was created, Rex stepped forward and joined the team. His former company had two men still reported as MIA’s and one of them was a close friend. His name was Stanley Larson. 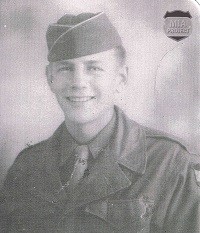 Rex and Stanley became good friends in the ASTP. Both men were on the basket ball team. « … Stan Larson was very good at center … » remembered Whitehead  » … and I remember thinking that he would have done our high school team wonders the way he played the board. »  While on the front, Rex lost track of his friend. He was with the mortars and Stan with the machine guns. When the battle began, Rex was in Honsfeld, at the rest area of the 394th Infantry. He was supposed to have a shower and attend a show of Lili Marlène, the darling of the mud soldier. Both were cancelled and the boys were hurriedly sent back to the front.

» … They called us in the Recreation Hall, … » recalled Whitehead, « … and said we just have to wait for transportation to get up there. Then someone came in and announced that all the men of the 2nd Bn were to fall out for there were trucks to take us back up. As we neared Bn Hq, a radio jeep came by and Capt Legare told us to get to our company as soon as possible for they were in need of men. I walked up Corduory Road to the platoon CP. It was dark by the time and I yelled in to Zombe that we were back and he answered « get the hell in here, want to be killed? ». A very convincing shell came in and I found myself « in there ». They told me of Stan Larson – legs blown off and dead, Zimmerman – dead, Williams, ASTP, had his arm blown off. Only one man was left in that machine gun squad… »

Always eager to help, Rex collected over the ensuing years countless valuable information regarding Larson and Zimmerman. He spent hours on the phone with former company buddies, produced countless letters, memos and maps. On site, despite the localization of the correct spot, the search yielded nothing but frustration. A declining health started to slow him down and as well as his hope to recover Stan.

On June 01, 2001, the MIA Project members located a mass grave and discovered Zimmerman and Fidler (see recovery on California Road). This caused a lot of excitements among the American members of the team, especially Rex. A crazy idea went through his mind. And if Stan was there too?

The day after, more osseous remains and equipment were removed from grave and laid on a large plastic sheet for the skeletal reconstruction. This is a standard procedure to arrange the remains in anatomical order and determine which bone was recovered and which one still missing. Beside bones, a meaningful shoe bearing a laundry number was recovered. It read ‘L-6476’ and it was matching with Stan Larson’s serial number. Though the recovery was an achievement of several years of research, the day was not over.

Larson’s pockets contained a spoon, a vial of water purification tablets, a plastic sheet that probably contained photos and a handful of cartridges. In his shirt pocket there was a red striated fountain pen. When the pen was cleaned, markings appeared. It read : REX WHITEHEAD

The group remained speechless for long minutes. The Larson story had come full circle. That same evening, Rex received photographs of the pen and a long email describing the discoveries of the day.

« What are you trying to do to an old man who can’t take such a shock everyday » was his answer. « I wish I could, but I cannot explain my thoughts when the pictures came through and I saw my name ». Rex admitted he could not explain the pen. « The last time I saw Stan, it was on the ship after we left Boston. Machine gunners and mortar guys were seldom close when on the line. I can only surmise that I probably lent him the pen at Miles Standish or on the boat. The pen doesn’t look familiar but I can guess that my folks gave it to me as gift when they knew we were going overseas. My father was running the bank of Grace and doled out pens, paperweight and other trinkets to customers. He usually had the items embellished with a company logo and he definitely had the wherewithal to have the pen engraved with a person’s name. »

« Anyway… » he ended his email « … I wonder what tomorrow will bring, but nothing can be a bigger shock than your photos today ».

On June 23rd, 2001, a FedEx truck stopped at the Whitehead’s house and delivered a small package. All the family was there that Saturday, all knew what the package contained but Rex had no clue of what was going on. All watched him as he began to unroll the paper. When he saw the pen, he just remained silent. He took it and kept rolling it over and over, shaking his head in disbelieve. Tears filled his eyes as he passed the pen for all to see.

Declining health prevented Rex from attending his friend’s funeral in Rochelle, Illinois, on July 22, 2002. He was represented by his oldest daughter Robyn and her husband Ron. On November 23, 2003, our team lost one of its mainstays and a true friend. Rex found his final resting place in the Logan City Cemetery.