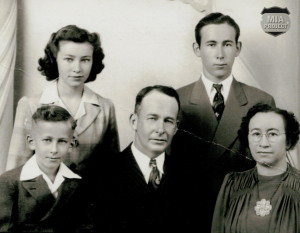 First child of S.B. McIlroy and Linna Hooker, James Roland McIlroy was born in Hill County, Texas, on June 6, 1924. JR (Jim) was raised on his parent’s farm and helped feeding chicken and taking care of the livestock. In the following years, a sister and a young brother joined the family. Life was tough at the time and there was not much entertainment for young children. The closest neighbors of the McIlroys was the Nelson family. The McIlroy brothers were very good friends with one of the Nelson boys. The little boy would often come over and spent numerous nights with the McIlroy family. JR’s mom enjoyed the little Nelson boy who came over to play. His name was Willie. Willie Nelson. Years later, that little boy became the famous country music singer, actor and performer.

After graduation at Abbott high school, JR wished to become a teacher. He entered Texas A&M university at College Station in September 1941. Having not reached the legal age to enlist, he joined the Army Reserves on December 14 of that year. Six months later, as soon as he turned eighteen, he volunteered for active duty. 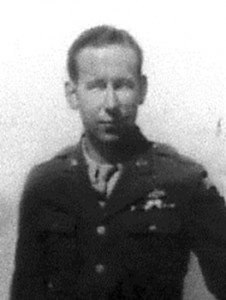 JR was deployed in Belgium with his division in November 1944. On December 13, 1944, he was at the forefront of a large scale attack aimed at the Wahlerscheid crossrads in the heart of Siegfried Line. After three days under bitter and miserable combat conditions, his battalion had penetrated deep in the German lines and had reached its objectives.The following day, Jim’s battalion was hurriedly withdrawn, as were all the others units involved in the attack. The Germans had counterattacked south of their position and the threat to be cut off from the rear was serious. Company F and the rest of the 2nd Battalion of the 393rd Infantry pulled back and were ordered to secure the northern access of Krinkelt-Rocherath. The road was vital, as it was the only way for the 2nd Division to pull back from Wahlerscheid and to assure the defense of the twin villages as well as the road leading to Elsenbom. All had been told to hold at all costs.

The night of December 18, 1944, the 2nd Battalion of the 393rd Infantry was ordered to withdraw toward Elsenborn. They had held long enough.

« … After dark… », remembers JR, « … we were told to pull back, that we had held long enough. At about midnight, we reached a ridge a mile or two from Elsenborn, where we halted. At that time, we were ordered to turn around and return to our former positions. My Company F of the 393rd Infantry,  was not in good shape, we were tired, cold, and hungry, but like good soldiers, we complied… »

» My 39-man third platoon was short of men at that time. Alvin Swisher and Edward Francis, plus our two medics, Richard Jordan and William Shelton, had been killed. George Snell, Stem, Edgar Shuman, Sumphsky, Alexander Jordan, Conrad, Carter, and Berton Starcher were wounded. Also missing were Arthur Mussey and one or two others. In spite of our shortage, my third platoon was told to lead us back.

It was just barely daylight when we approached our old positions. I was in front with Stewart Lusk and Al Okscin. As we feared, the Germans were in our foxholes. We had fixed bayonets. I was carrying an M-1 rifle as my BAR had been hit and destroyed on December 17. We charged and killed several, maybe seven, and the rest fled. Paul Vescovo was a little behind us and shot a couple more as they ran. After throwing the dead Germans out of our foxholes, we assumed our positions. Our only casualty was Lusk, who was shot in the leg and had a puncture wound from a bayonet in his hand… »

» … When things settled down, I noticed that one of the dead Germans had a holster with a P-38 pistol. I took it quickly. After a while I found a burp gun and added it to my collection. While holding all day, I kept looking at the shoes that one of the dead was wearing. It seemed to me that hobnailed shoes would be better on snow and frozen ground. They too became mine.

When we did pull back, late on December 19, I was wearing the holster and pistol, carrying the burp gun, and wearing hobnailed shoes… » 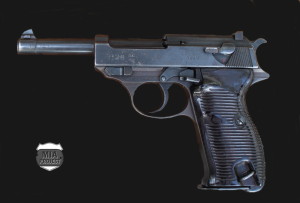 The serial number of this beautiful AC 42 exemple identifies a January 1942 production.

JR wore that German pistol for the balance of December and all of January. It was admired by all the platoon since it was the first one they had taken. Combat and extremely hard living conditions in the bitter Belgian winter had taken a heavy toll on the men (see JR’s recollections of the Elsenborn Ridge). Replacements filled the gaps in the company during the month of January and he was promoted to Sergeant. Still wearing his P-38, he found himself leading his section during the ill-fated attack of the 393rd Infantry on January 30, 1945. The 2nd Battalion was to recapture the ground lost in December. The first objective was the edge of the forest east of the Elsenborn Ridge.

The battalion was to leave the line of departure during the night and approach the forest to a distance of a 100 yards and wait. Just before daylight, artillery was to lay a heavy barrage on the German lines and allow the two point companies to attack in force over the last 100 yards. Daylight came but not the artillery. Caught in the open with their OD uniforms standing out against the snow, they became sitting ducks in a shooting gallery.

« … That day, we pitched off early, 2 or 3 am in the worst snowstorm of the winter. The snow was knee deep and in drifts, it was waist deep. At about daylight we found ourselves still not at our first objective, the nearby forest. The Germans were in the woods and there was about 100 yards of clearing before we could reach their position. The Germans had crossfire on us and they were well protected with an open field of fire. We advanced about 50 yards before they opened up on us. With no room in the deep snow to maneuver, all we could do was go to the ground. Each time we tried to move they fired on us. All of us, wounded or not, had to lie there until dark. When we tried to pull back, I found I had no feeling in my legs. I was partially frozen and in great pain. I crawled back and was evacuated by sled, then by weasel. My wound was not bad but I was almost frozen to death. I had frozen feet and pneumonia.

I was in great pain and heavily sedated with morphine. Two days later when I came up, I was in a large field hospital at Verviers, Belgium. I was lying between clean sheets, having been bathed, and given a haircut. I thought the Germans had killed me and I had made it to heaven. My feet were purple and gangrene had developed. One day a group of doctors entered the large room where I was and stopped by every patient. We all had trench foot. I noticed one of the doctors using a long needle to test the sensibility of the patients’ feet. I quickly realized that no feeling was meaning amputation. When it was my turn, the needle penetrated the flesh and I just felt nothing. I couldn’t imagine my life with amputated feet. I fainted a painful reaction.

My feet eventually healed and I saved them both.

All I had was my wallet, a small Bible and the P-38 pistol, without the holster. At Verviers field hospital, a Belgian nurse came by and said I could not have a pistol in the hospital. After 80 days of continuous combat, I was no longer reasoning very well and refused. After a few trying to get the pistol nicely, she came back and said the doctor had ordered her to take the pistol. I told her that if the doctor wanted it, he had to come and get it. She suspected I was not going to give it peacefully, so she came back in a while with a piece of leather, a punch, and some leather strips. She pulled up a chair and proceeded to make a small holster. We pulled the pistol in it and she tied it under my pajamas … » 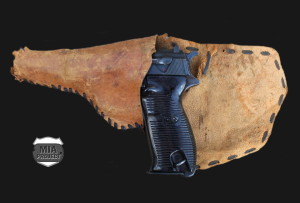 JR’s P-38 in its Belgian hand made holster

« … I went from Verviers to Paris General Hospital, then to Scotland and finally to the U.S., with the P-38 still strapped under my pajamas. Seven months later, in August 1945, I was discharged – with the pistol.

I still have that P-38 and the handmade holster today. I think I can claim I was the only armed patient that any hospital held for seven months … »

After his discharge, JR resumed his studies at Texas A&M, obtaining a  Bachelor of Science in agriculture education in 1947. In June of that same year, he married his girlfriend Virginia. She will give him three boys and one daughter. JR first taught high school Vocational Agriculture in Temple and later in Celina. He also worked as a pure bread livestock dealer. In 1957, he entered the car business and became a prosperous Chevrolet dealer in Celina, Texas, for the next 45 years. He retired in 2002.

Over the last four decades, JR, or « Mac » as he was known among his former Army buddies, acted as secretary-treasurer of the 99th Infantry Division Association.

Today, the Celina resident enjoy a peaceful life. His P-38 as well. It still represents an interesting start for a conversation with visiting friends. 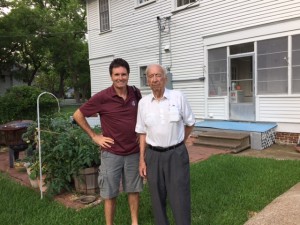 Note: At the time, Texas A&M was all male and military. Any one who finished A&M would be commissioned a Second Lieutenant. During WWII, A&M commissioned more officers than any of the military academies.

Sources: Correspondances and conversations with JR McIlroy.
After Action Report 393rd Infantry.
Special thanks to Jett J. Johnson for his support and photographs.