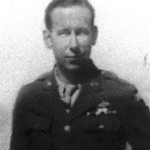 “… The real question is what did we do with our time. Actually we stayed in these small enclosures for days and weeks at a time. Crawling out of these holes after dark to answer the call of nature, to receive rations, to move into an outpost or to check on the rest of the squad. During the day it was almost impossible to move outside without drawing artilery fire. The German forward observers were only a few yards away in the next hedge row.

(1) We tried to sleep during the day because at night we were on guard two hours and two hours off in each hole. Without being able to see our watches, I am sure we changed guard at least 10 times a night. The nights seemed unending. Dark came as early as five o’clock and daylight about eight o’clock.

(2) We prayed, with shells falling all around us. Sometimes it seemed the shelling would never cease. There were so many hits by artillery, the landscape around us looked like a black and white checkerboard, We just held on and prayed the next one would be a dud.

(3) We tried to stay warm. We wore all the clothing we had other than an extra pair of socks that we tried to keep dry. Our wardrobe consisted of socks, long-handle underwear, wool pants, wool shirt, a sweater, cotton gloves, wool cap, helmet liner, helmet, and field jacket. The dirtier and greasier the jacket the better it would turn water and snow. Only the replacements had overcoats. No experienced combat soldier would wear one as they were heavy and would freeze when wet. Gas masks were discarded and the gas mask holders held our only earthly possessions (candy, cigarettes, a few old letters, toilet paper, and maybe a little writing material). We usually had a light sleeping bag and a GI blanket or two. No matter how dirty or smelly our foxhole buddy was, we snuggled. The body heat from each other probably kept us from freezing.

(4) We talked. Sometimes in the day we talked of home, school, familles, but we never talked about the future. After two months of combat and our buddies fast disappearing and with no sign of the war ending, we really didn’t think we had much of a future. We talked about getting a million dollar wound for we realized this was our only way out. What we talked about most was food. It was nearly impossible to get cooked food up to where we were and when it did arrive it was about frozen. D-bars, K- rations, and C-rations might sustain you for awhile but what we wanted was a good old American hamburger or our mother’s home cooking. We tried hard to warm some of the C and K-rations but it’s pretty hard to heat a frozen can of hash from torn bits of K- ration boxes.

5) We read. We read anything we could get our hands on. I had a New Testament and that I read completely. Sometimes we got a copy of the Army newspaper, « Stars and Stripes. » Sometime in January, we did receive some mail. This was read and reread.

(6) We went on patrols. This was practically the only time we ever crawled out of our foxholes. Even though this was a much dreaded assignment, sometimes it was almost a relief just to get out and walk.

(7) We smoked. Even though we didn’t get enough food, we always got cigarettes. They came in our rations and some in other ways. Chelsea, Chesterfield, or Camel – the brand really didn’t make a difference, smoking gave us something to do. Sometimes at night we even kept time that way. We would keep a cigarette burning in the foxhole, bend back over and puff on it to keep it going. If it took 15 minutes to smoke one, then four would make an hour.

(8) We watched and observed. Even when we rotated watches on clear days, we were watching. From our position on Elsenborn Ridge, we were looking down on Krinkelt a couple of miles away. To the northeast there was a large opening and you could see all the way to the forest. To the west we had a company command post in the cistern surrounded by trees. We also looked to the sky on clear days. A few times we were strafed by German planes. Also on clear days, American planes were out in great numbers. Bombers headed for rear positions, fighter planes guarding them and P-38s dive bombing and strafing the hedge rows just to our east. We could observe our own artilery as it reached its devastating goal. In watching the sky, we soon learned that if high clouds started coming over from the northwest it would soon snow. Snow and cold was a constant. There was not one day from early December until we moved on attack on Jan. 30 that there was not snow on the ground.

(10) Beyond all, we endured. I think this properly describes our six week stay in one small foxhole. With almost constant shelling and frequent enemy attacks, we were always scared, always hungry and always cold; we did what we had to do. We endured. All the days were not the same, monotony may not completely describe this situation. Irksomeness, sameness and weariness might better describe this ordeal.
Many times we discussed ways to escape this dangerous and weary situation but we all knew that deep down in our hearts we would do the right thing. We could neither leave our buddies nor disgrace our families by doing anything but remaining. We knew we would stay and hold this position until we were carried off on a stretcher or ordered to move…”