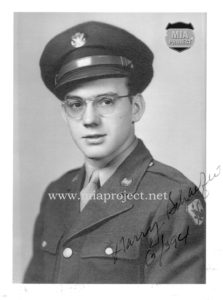 “… After the 3rd of January 1945, the influx of replacements began. 2nd Platoon of G Co. received a bunch on Jan. 15 and more over the next few days, bringing us as close to full strength as we had been since crossing the Channel. My records show that as Platoon Sergeant on Jan. 25, I had 35 enlisted men including myself. It was around the 25th that we moved from our original positions assumed on Dec. 19th, to positions previously occupied by F Co. 395. It was a repositioning for the impending attack by Vth Corps to recapture Büllingen, Krinkelt, Wirtfeld, etc. and resume the attack on the Roer River dams that the 2nd Division had started Dec. 13 and was rudely interrupted on the 16th.
On Jan. 30, I was briefed on the action we would be involved with the next day. G was to be the reserve company of the battalion. The 2nd Platoon was to be the reserve platoon for the company. As such, the Platoon leader, Lt. Loftus, would be assigned Bn Liaison Officer, and the Platoon Sgt. (me) would have the platoon. I felt real comfortable with the situation of leading the reserve platoon of the reserve company in a battalion attack that should be a cake walk. This was in spite of the fact that only two members of the platoon had experienced any combat action, which, of course, is the reason we were the reserve platoon.
It was late afternoon on the 30th that we moved into position for the attack scheduled for 0300 Jan. 31.

… G Co. was on the left cheek of what appears to be a rump and F Co. was on the right. E Co. was behind us someplace and would move with F on their right flank. They advanced with no resistance until the lead elements had almost reached the wood line of the objective and both companies were fully exposed. Then Jerry opened up with MG and rifle fire, pinning them both down in the snow. We heard the firing but what else is new. Then the casualties started streaming past. The medics had to use Weasels and sleds to move them back. About noon … the Bn C.O. decided to commit G Co. and we saddled up and came up along E Co. G was to assault the MG nests on the left and with that diversion, hopefully F could move on the right. The woods were mined and booby trapped so G stayed out in the open more or less with the artillery pounding the enemy. This works sometimes but not this time and our 1st and 3rd platoons were promptly pinned down also.
The only maneuverable unit left for the Bn C.O. was that once smug S/Sgt and his reserve platoon of the reserve company – ME!
This nut had to be cracked or the Bn C.O. was going to be caught with eggs on his face for advancing into a trap and having to ask for help from regiment.
The solution was simple. You send Schaefer and his platoon of replacements (on their first combat attack) through the mines and booby traps until they have penetrated far enough to come up behind the enemy dugouts. There was no point in saying « Scouts out » because those men had no idea what was going on. We had barely reached the LD [note : Line of Departure] when a short round from our artillery barrage wounded my first scout, Aloysius J. Coy. So we were short a man and hadn’t even started. I told them to follow me in single file and step in my tracks in the snow. I pointed out the mines and trip wires and they in turn did the same for the guy behind them. When I thought we were far enough in, we turned and crossed a fire break. On the other side I found a Jerry path leading in the correct direction and knew we were out of the mines. We got them all through and I told my squad leaders we would continue up the path until we were behind the enemy, then do a right face into a skirmish line and close on their positions, assaulting them with marching fire. 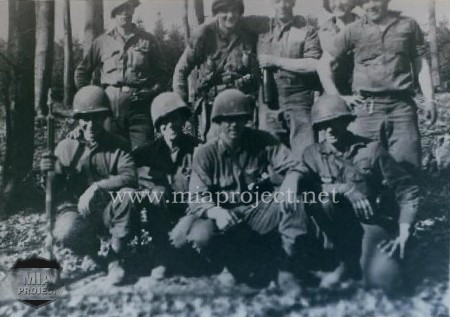 Before we had gone very far, ahead on the path, here comes Fritz, MG over his shoulder with belts of ammo draped around his neck. Just like in the movies. It is standard procedure to cover a mined and booby trapped area with an automatic weapon. We had passed an unoccupied position and he was on his way to fill it. Had he been 20 minutes earlier, I’d still be in that mine field. But he wasn’t and I had my men through it. We froze and ole Fritz, who was day dreaming about something, walked right up to me, that is, 5 yards or so. With my rifle in his stomach, he dropped his MG and put his hands on his head. With nothing better to do with him, I took him along with me, hoping to use him if for nothing else, a shield. We moved on up the path and from the sound of their firing; I figured we were far enough and signaled the squad leaders to take over and roll them up. I lost Fritz in the mayhem because there were armed enemy to take care of. We advanced over 150 to 200 yards of open ground, squads in staggered formation with the three squads abreast. I had the right flank squad. Our FO kept the artillery on the edge of the woods until we were 25 yards from it and then raised it 50 yards. We charged in against unorganized small arms and at least one MG42. Thibeau, Anderson, and Kratochvil (all of my squad) were wounded before we could silence them. We blasted and cleared a multitude of covered bunkers… they were larger than our two man foxholes and well covered. Most had stove pipes sticking out the roof, making an ideal place to deposit a grenade. We killed a bunch and took five prisoners who didn’t want to die.

Anderson and Thibeau, as walking wounded, accompanied the prisoners back to our lines and them became charges of the medics. I never saw either of them again until many years after the war. Kratochvil, on the other hand, was wounded in the thigh and had a fractured femur. When the word came to pull out, I tried to persuade him to let us carry him back but he refused. He had been my foxhole buddy when we first went on line and it was very difficult to leave him. The battalion moved on to their objective and we spent the night in the positions we had captured. The next morning the 3rd Battalion passed through us, and we returned to a house in Elsenborn where we spent the next couple of days…”

Months after, S/Sgt Schaefer while in a hospital in France, learned that he had been awarded the DSC (Distinguished Service Cross), the nation’s second highest award for that action on the Elsenborn Ridge. Harry’s sense of humor and humility contrast with the citation.

GO n°69 – 5 may 1945
Distinguished Service Cross award.
Harold F. Schaefer, company G, 394th Infantry Regiment, 99th Division.
“For extraordinary heroism in action against the enemy on 31 January 1945 in Belgium. When his company was pinned down by heavy machine gun fire from hostile strongpoints, Staff Sergeant Schaefer led his platoon on a flanking movement through a heavily mined field, pointing out trip wires and anti personnel mines to his comrades. Encountering a German soldier carrying a machine gun, he forced him at rifle point to drop his weapon and to call to an other hostile gun crew to surrender. When a second enemy weapon opened fire into the flank of his company, Staff Sergeant Schafer crawled to within a few yards of the emplacement, hurled several grenades and knocked the weapon out of action.”