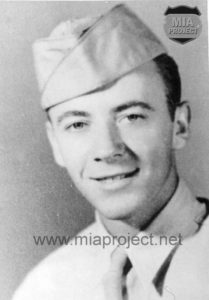 “…To reach our water supply we had to walk several hundred yards to our left rear to the road from Elsenborn, and a couple of hundred yards more beyond that. There a small stream emerged from under the snow, spilled downward a few inches into a small gully about two feet in diameter, then vanished under the snow once more. Every man who made the trip there for a supply of water, and that includes just about everybody, was made aware that German gunners didn’t intend for him to live through the trip. The gunners reveled in their shooting sport, and sharpened their skills by tracking each man the distance to and from the water hole, often expending a half dozen or more shells. The economics involved was terrible, even if a lucky shot got a man now and then the cost was prohibitive.
Yet they persisted — there definitely was no shortage of shells among the enemy units opposing us. Description of one trip of many is sufficient… »

« … Glass [note : Pvt Elliott Glass] and I carried a jerrycan to fill, and the trip was uneventful until we reached the road. A jeep was parked there and, since things were quiet, we stopped to talk with two or three men who were unloading the cargo. At that moment the shells of a battery of 88’s came tearing in. I ducked half under the jeep, with Glass beside me. The others took off somewhere. The stuff was right on the road and awfully close, and the battery kept firing for several minutes, then all was quiet again. Badly shaken, for we should have been dead, we stood up by the jeep. It was one of those times when you are thankful for your good fortune, but can in no way account for it. The unloading crew appeared from somewhere — they had abandoned the jeep — and well they might, for they told us the cargo was a load of mortar bombs. It doesn’t take much imagination to wonder what would have become of us had that stuff gone up — only a large hole in the ground would have marked the spot of our recent demise. But infantrymen learn to take such in stride. — no big deal, close ones were a dime a dozen. So we continued on to the water hole. As I bent to fill the can, I heard it coming, one shell, and dead on target. I sprawled in the shallow gully with Glass on top. WHAM! Dirt, water, and snow covered us — but we were still unhurt. The shell blew in the right side of the gully bank. Halfway back, the gun picked us up again, and down we went in the soft snow. WHAM! Right beside us, then two more as fast as loaders could slam the shells into the breech. Then quiet again — except for an ominous gurgle. The jerrycan was holed six inches from the top by a fragment that could have taken an arm off. We were proud of our can — something of Mauldin’s « them what’s been shot at ». The point need not be made that each man had similar close ones, dozens of times…”