A squad of infantrymen of Company H, 393rd Infantry was slowly moving through a dense evergreen forest. This was a mop-up of the defeated German troops following the Battle of the Bulge and prior to a new large scale offensive to the Cologne Plain and the heart of Germany. Twenty-two years old Sid Salins was carefully watching each of his steps as he progressed in a light haze. Steady racket of machine gun and rifle fire still reverberated through the woods as small groups of isolated Germans held out. Scattered enemy artillery still interdicted road crossings but generally the enemy was now in full retreat. Sid’s squad mission, therefore, was to round up the stray enemy while making rapid advance to the newly established forward line. The young native of Altlantic City, NJ, recalled :

“… Progressing methodically through former enemy strongholds, we were careful of booby traps, undetonated mines and shells, all the while picking up an occasional « Jerry » or two along the way. The March wind was still quite vigorous, and while a good deal of the winter’s snow had vanished under the gradually thawing forest floor, there was still an Artic chill in the air fully permeated by the smell of gunpowder and spent shells that had scarred, broken, and burned the trees around us…”

About one full day into the advance, a German officer waving a white handkerchief from a long twig, emerged from within the tree line.

“… He wanted to surrender…” recalled Salins “ … and simultaneously handed me his pistol, raising his right hand and arm to its limit skyward, and yet still tenaciously clutching an expensive looking attache case, in his left hand. I ordered him to give it to me, grabbing at the same moment for the case. He refused, still clutching the handle of the case firmly. With obvious disregard for his anxieties, I wrenched it free. We quickly opened it, and discovered it was chock full of crisp new 20 mark bank notes, wrapped in neat 1000-mark wrappers, a whole solid attache case full, perhaps half a million marks and a half loaf of brick hard black bread. Again our captive pleaded, grasping desperately … but not for the money… for the bread! “

The German officer retrieved his so desired piece of bread, after all nobody wanted it. He was very grateful, a smile pierced his face and thanked all the boys with plenty of “danke schön”. He promptly stuffed it under his jacket, clicked his heels, and smartly saluted.

“… We searched him for hidden weapons, grenades, or whatever and found him clean …” continued Salins ”… Next, doing the interrogating in the best « deutsch » I could muster, I asked for his name, rank, and unit. He introduced him as Major Hoffman and informed us that he was the Regimental paymaster of a Volksgrenadier Regiment. His headquarters had been overrun two days prior by one of our armored divisions, and he had escaped with as much of the Regiment’s pay as he could carry! He impressed us with that fact because he felt if he were ever reunited with his troops, they would need this money in as much as they had not received any pay for three months. We told him to forget it!…” .

Salins and his squad mates dispatched the German Major to the custody of the MP’s but kept the case. 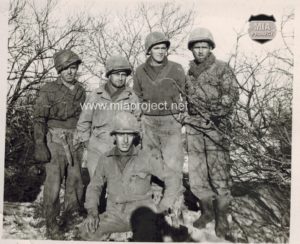 “We felt we were rich and we divided all between us and stuffed our pockets full. Everyone of the four giant sized pockets in our combat jackets now bulged to their capacity! Mike asked me if I thought if the money was still good. I told him it wasn’t. Alles ist Kaput I told him, but if it were, we’d be richer than hell! »

The squad resumed its advance along the woodline and as the first shades of darkness approached, they came upon a triangular stand of three Sherman tanks. As was common practice among armored outfits with no obvious enemy presence, three tanks would often park in the shape of a triangle, the center area was then used as a sort of small enclave, within which the men could shave, wash, eat or just shoot the bull. As Sid Salins’ squad walked by this little fortress, they noticed the tankers had a fire going in and they were dangling cans of c-ration from bayonets they held over the fire. They were merrily simmering from the heat, and enhancing their drab flavor. In the immediate background was a heavy safe, door ajar and containing stacks of the same crisp 20 mark notes previously ‘liberated’. The tankers systematically reached in for a new supply to throw on the fire and speed up the heating process of their meager rations.

« … I chirped to my fellows that this was the answer about the dough! It was about as worthless as those World War I mark notes we found in most German houses. To further prove my point, I momentarilly stepped out of the line of march, deftly moved toward the Armored fellows’ fire, and deposited my contribution onto the brightly burning flames. All but one of us, then followed suit! It was obvious that these were the GIs who had overrun the Jerry headquarters, « liberated » the safe, and finding nothing more valuable than the worthless German marks, and were now content to settle for the benefits of warm rations … »

The squad current objective was reached in the course of two days. Many days, and months, followed. After VE Day, Sid and several of his company fellows remained in Germany for occupation duty in the vicinity of Neustadt/Aisch. Mainly watching the rubble get cleaned up, helping military government taking over all administration of the defeated nation and eventually the rehabilitation of German homes and businesses.

« … It was during this period of transition from war to peace in Germany, on a pleasant September afternoon of 1945, when the local town courier posted a bulletin in the town square that attracted our attention, along with most of the town’s populace. All in German, it read essentially as follows:

« ACHTUNG », (attention!)… « be it known that effective 1 October 1945, all State banks will reopen for regular banking business, as existed in pre-occupation days by the United States Military Government. The following serialized German Reichsbank notes will be redeemed at face value in the form of U.S. Military Occupation legal tender. Marks of years 1939 through 1944, numbers xxxxxxxxx through xxxxxxxxxxx! Please redeem all such currency as may be in your possession as soon as practible, in order to stimulate the buying power of the German populace, and the country’s economy …”

The lone member of our squad, during combat, who had decided to keep his share of the « worthless » dough, was immediately summoned to compare dates and serial numbers. AND IT ALL MATCHED!

PFC (name kept untold), owned a sweet little nestegg of quite a few thousand equivalent American dollars, which were later to finance him through nine years of higher education, and the start of a very successful professional career back in the good old USA! Alas, the rest of our infantry squad had squandered thousands of dollars. We had literally had, « money to burn »!

Sidney D Salins was finally discharged on 22 January 1946 and came back home where his wife Betty was waiting for him. Together they raised 3 children. Sid was a member of the 99th Infantry Division Association. He passed away on September 24, 2006 at his Silver Spring, MD, residence.