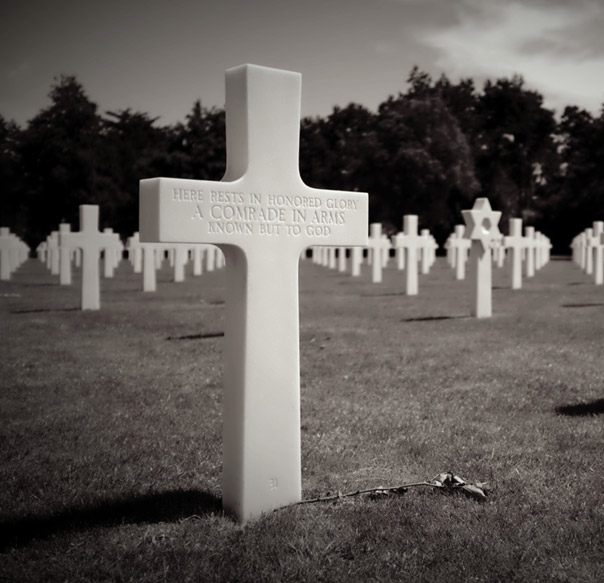 During World War II, the U.S. Government called about sixteen million men and women into military service. At war’s end, the dead totaled over 405,000. About two thirds died during the European-African-Middle Eastern campaigns. The remaining third lost their lives during the Asiatic-Pacific campaigns.

A majority of the dead were identified and later repatriated to the United States or buried in permanent military cemeteries overseas or buried with honor at sea. The remainder were never recovered or positively identified. Today the U.S. Government lists 73,661 servicemen as “not recovered.”

Many of the unrecovered dead were originally reported “MIA,” an abbreviation for missing in action. The term applied to battle casualties whose whereabouts were unknown. This occurred for many reasons including killed in action, captured by the enemy, and even desertion in combat. Prisoner-of-war names were usually released through the International Red Cross, and their status updated to POW. Also, Grave Registration Service companies followed combat units and collected fallen soldiers. This too resulted in status updates.

After the war, the Grave Registration Service transitioned its duties to the American Graves Registration Command. The latter organization worked to locate and identify unrecovered dead. This effort, part of the “Return of the Dead Program,” continued through 1951. AGRC teams scoured battlegrounds, investigated aircraft crash sites, and searched remote locations for isolated graves. On December 31, 1951, the program ended. All unresolved cases were closed and the bodies deemed “non-recoverable.”

Of the 73,661 servicemen listed as not recovered, as many as 8,597 were actually recovered decades ago or during the war. Unfortunately, lack of identification media and other factors compelled the military to inter them as unknown servicemen.

Each unknown received an X number, a unique identifier. In Europe the numbers related to the temporary cemetery at which the remains were interred. This system began during the war. The army established about sixty temporary cemeteries across northwest Europe and southern France. Some only saw short term use and soon closed, their burials transferred to other cemeteries. After the war, the AGRC inherited thirty-six temporary cemeteries in that area of Europe. The X numbers relate to those sites. Ten of them eventually became permanent cemeteries, and the unknown burials were distributed among them.

As for the X number system, the U.S. Army mortuary at Frankfurt, Germany, continued using it after the AGRC ceased operation. The mortuary eventually passed the progressive series of numbers to the present day U.S. Army Memorial Affairs Activity Europe.

For each X number, the army created a file containing all paperwork related to the case. This included burial reports, search-and-recovery narratives, and affidavits from civilians who had pertinent knowledge. The type and quantity of documents varied greatly from file to file. Today the X-files are stored at the Washington National Records Center but have not yet been accessioned to the National Archives.

Now in the 21st Century, historians and researchers have information sources and computer databases unavailable to the AGRC. These offer new ways to cross reference X-files with unresolved cases. It is tedious work, but sometimes a match can be found after developing a fabric of evidence. Such evidence combined with DNA analysis can lead (and has led) to positive identifications.

This section will present X-file stories, some with fascinating backgrounds and others with compelling evidence suggesting the identity of an unknown serviceman.

There are 8,597 World War II unknowns interred worldwide. But that number comes with a caveat. Many of the unknowns consist of fragmentary and sometimes burned remains. Evidence suggests that some may be missing pieces of an individual whose remains were recovered at another time, positively identified, and interred elsewhere. In other instances, the remains of one serviceman may be dispersed between multiple unknowns or the remains of multiple servicemen consolidated as one unknown. The AGRC worked to prevent such occurrences, but they were unavoidable given the technology of that era. It is impossible to know precisely how many of the 8,597 burials represent only one individual, one individual unassociated with another burial.