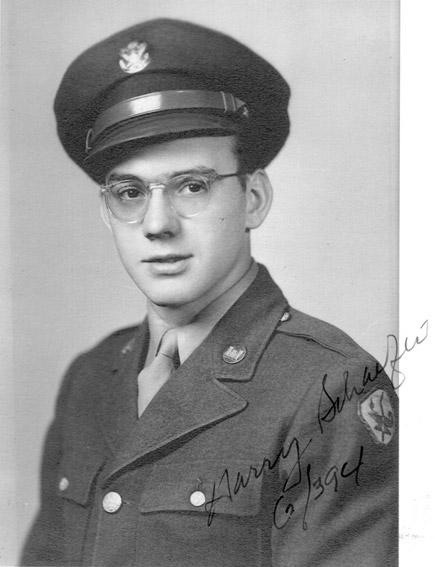 “…In the morning [of December 18th] E Company swung around and closed the gap to C/393, thereby presenting somewhat of a two Bn front. Since neither Major Legler, CO 1/393, nor 2/394 had any contact with higher command, it was then decided to move 2/394 into the 1/393 area and move out as a group westward, hoping to contact friendly units. Someone obviously felt that the Infantry should not follow a perfectly good logging trail, so we were led into a draw which headed northwesterly approximately 500 meters, where it entered a larger draw that headed WSW and eventually came out of the forest at the same spot as the logging trail. We followed that route with E Company on the right, followed by 1/393 and G Company on the left, followed by F and the elements of H and C/394. We came under fire by either friendly or enemy artillery along the way. Ed London was killed and Roy Geddes was wounded. Both men were from Dorsey Ball’s Squad of the 3rd Platoon. We left London propped up against a tree with the typical marker – bayonet tipped rifle stuck in the ground and helmet over the stock. His body was found just as we had left it when the area was policed up in February. Geddes was carried out and left with other wounded at Mürringen later that day.

We picked up another logging trail that ran along the side of the draw which made the going a lot easier for the last 600 meters until we broke out of the forest, overlooking a creek, at about 1200. Beyond the creek were open fields, cut by hedgerows, extending up a steep then gentle rise all the way to Mürringen. The converged logging trails went down to a bridge that spanned the river and became a road into town.

I’ve often wondered what was going on in the minds of our two Bn CO’s and staff as we looked out at that peaceful scene leading to Mürringen, where our Headquarters had been when they sent Capt. McCune up with the order to withdraw. A Recon Patrol could have found out what we needed to know – namely, Regiment had high-tailed it out of there at 0230 that morning. Instead, we advanced on Mürringen in the same formation used in the draw, except that now the road was the divider between G and E Companies and their followers. It was about 1300 when we jumped the river and started up the incline. According to Curtis Whiteway, E Company advanced less than 1000 meters and was pinned down behind the earthen dam of a stock pond. G Company does not recall hearing any enemy fire which partially explains why they went merrily on their way, thinking that their right flank was covered.

As we advanced on Mürringen, we had the opportunity to restock our packs with rations found in abandoned foxholes. We must have been nuts to think that Regiment was in Mürringen when these defenses were vacated. And if we didn’t think they were there, why did we go in with both flanks exposed, no heavy weapons and no ability to call for artillery support?

The point was approximately 100 meters from the first house on the left side of the road when the first Jerry was spotted. There was still time to get the hell out of there but somebody fired at him and woke up the whole damn German Army! This was the first enemy fire I had heard and we were a good 1000 meters in front of where Whiteway and E Company were “pinned down”.

For some reason, the CO ordered us to attack and in we went. We took the first two houses on the left, crossed a road coming in from the left and took the next house. By now, Jerry is fully awake and has set up a machine gun in the loft of a barn and is firing down the road that came in from the left, thus making it impossible to continue crossing. The machine gun was on E Company’s side of the road and had to be knocked out. Part of the 1st Squad of the Second Platoon was sent across the E-W road to contact E Company and get Capt. Patterson to clear that barn. A [German] armored vehic1e has now moved in place and is firing down the E-W road. It made for an interesting crossing as I went in search of E Company. I followed a hedgerow approximately 100 meters when I saw a human form, squatting down on the other side of the hedge. I walked up, squatted down opposite him, said “hello” and was looking into the blue eyes of a Jerry soldier. It’s a tossup as to who was the more surprised, but I think he was because I had seen the form and he may not have seen me coming. The M1 is faster than the German rifle, or I was faster than « Fritz, » because he got to die for his country.

Being an ASTP boy, I was bright enough to know that E Company was not in German uniforms and headed back across the E-W road to inform my CO. My Squad Leader, Francis Jurgill, had been wounded as he crossed the road and was lying by the hedge as I went back to report to the CO. I was then dispatched along with John Kratochvil to retrieve Jurgill. We made it over because machine gun fire has a tendency to speed you up. Jurg had been hit three times. He had a head wound, a buttocks wound, and one that broke his leg. We did not have speed going back but accuracy was not that gunner’s long suit. We took Jurg into the house where other wounded were and wished him luck.

When John and I exited the house, we noticed a bunch of officers nearby having a heated discussion. I saw a white handkerchief and heard the word « surrender. Kratochvil and I looked at each other and in unison said, « I’m heading for the woods! » What the hell, F Company and the 1/393 were back there someplace and of course, now we knew that E Company was also. I did not know all the officers in the group. I have since concluded that one of the unknown officers was F Co Commander Lt. Goodner. F Co was supposed to be following G and held up when E Co stopped advancing on the right. He came up to tell G Co that McGee [ Note: Capt Bob McGee, 2nd Bn S3] was now in command of the Bn and wanted to disengage and follow the creek toward Krinkelt. Major Legler (1/393) had never committed to going to Mürringen, always intending to attempt to reach 393 at Krinkelt. They had taken a defensive posture at the creek to await the results of the Mürringen incursion.

In Mürringen the discussion to surrender ended with the decision to withdraw and the word went out. The severely wounded were gathered and a couple medics volunteered to stay behind with them. The boys across the road that came in from the left had a decision to make. Take a chance on being another body lying on the road or stay put and surrender. We left Mürringen around 1600 hours with a beautiful fog covering our withdrawal. We had left some 30 able bodied and 16 wounded or killed behind. Not a good two hours. In return we had one prisoner, an ox of a man and looking twice his size in his Great Coat. He was very helpful in bringing out our walking wounded.

Our retreat from Mürringen took us on a path 400 meters in front of where E Company was “pinned down”. I can’t to this day figure out why the enemy who was pinning them down didn’t fire on us… “

We assembled in an area near E Company and got the word that F Company was going to lead us out. While waiting, it was decided that our Sgt. Reynolds, who had been shot through the mouth, should be surrendered for medical aid. Harvey Williams volunteered to take his buddy back using an abandoned Jeep we found in the assembly area. The Germans refused them and before we left, here came Harvey, Reynolds and Jeep to rejoin the column. Frank walked it out with the aid of Williams and Henry Rump and probably others.

We moved out following the south side of the draw and headed for Wirtzfeld. As the lead elements of the column passed a large sawmill, the entire column came under artillery attack. From the incoming direction, we assumed it was ours. After hitting the valley, it concentrated on the area of the mill where the Mürringen-Krinkelt Road crosses the creek and goes into Krinkelt.

Once G Co was past the mill area, the artillery lifted and the 2/394 continued along the river. However, in the confusion of the shelling, a gap had opened up between the tail end of G Co and 1/393. When they reached the road, they thought the lead had crossed the bridge and gone up the road into Krinkelt. They went that way, splitting the column.

F and G were not aware of the break and continued. Here we met the 2nd Division men who were still holding this portion of the road. With a sigh of relief we entered friendly territory after three days behind enemy lines. We gave up our walking-wounded to the Medics and the rest of us continued onto Wirtzfeld and then to Elsenborn. We arrived around 0100 and after something hot from somebody’s mess, we crawled in the hay of a barn and got some much needed sleep. At 0800 we got hot chow and tried to organize the ragtags who were left. The 2nd Platoon had gone into Mürringen with approximately 30 men and arrived at 2nd Division lines with 13. Three of these were walking-wounded (James Burtner, Charles Moffitt, and Lon Anderson) . After the morning of « care and cleaning » of equipment, we moved out to take up our defensive positions to the east of Elsenborn…”