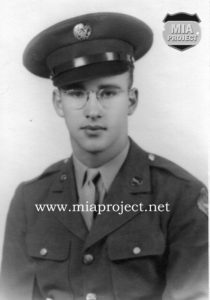 “… Around the first of January, Merle Beaver received word that he was a father of a girl, and after that he settled down to sweating out shells instead of shells and his wife. One day they told me that I could go to the rear for a shower, so Peeley Thomas and I took off for Bn. We went before daylight so as not to draw fire from the Jerry artillery. I had a list of things to get, pipes, cognac, etc. About 15 Kraut planes came over in a straight row, which was different than we had seen. Our Ack-Ack opened up after they were almost out of range. Bn had been hit by a shell and a couple of guys got it there, we heard. We walked the mile or so into Elsenborn and waited at the Regt’l kitchen for the trucks, we were almost frozen. Finally the truck arrived, we loaded up and left. We drove west, from Elsenborn, just as it was getting light. The truck stopped in the area of Camp Elsenborn for some reason, so we got off and waited for the driver to return. Suddenly there was a blast and we all hit the ground, which we were very good at. Then, we realized that a shell had not landed but had been fired for we were standing close to an artillery battery we had not seen. We felt foolish, but the artillery guys didn’t laugh. They understood.

Back on the truck and out on the very narrow highway. We passed more artillery in position than I thought existed in all of the Army. Soon we were out of hearing distance of the guns, and everyone started talking and laughing at once. For the first time in a month we felt safe. No shells could reach us and we were above ground.

I looked around at the men from our battalion. Peeley was the only one I knew. They all looked the same, faces blackened from burning gas in bottles or cans with strips of blankets or socks for wicks, so as to have light in the hole. My buddy, Hack Wolff, and I had done the same until we decided it was not worth the coughs we were developing.

One GI became the center of the conversation, for he was very funny and had all of us laughing at his humorous way of relating his experiences. With his black face, dirty uniform and Kentucky accent, I felt that it was a shame anyone as old as he should be rifleman and go through what we all had for a month. I was nineteen and he was « old ». Soon almost all the conversation stopped, even our funny friend had ceased telling his stories. We were cold. You can’t get any colder than in the back of a 2 1/2 ton Army truck in the Belgian winter. Part of it was the wind chill factor, a term not used at the time. The first pain is from your feet, that steel floor feels like solid ice, only colder. Then you pull your fingers out of your gloves and make a fist to help circulation, but it doesn’t work. The steel truck bed seems to pull in all the cold in the world, helped by the gun you’re holding and the steel helmet you’re wearing. Suddenly the side of the truck was smacked by a passing vehicle and gave us a jolt. Everyone must have felt as I, great way to get it after getting off the lines. After awhile the truck stopped, and it was good feeling to know we were there and could get warm. We were not ‘there’, the driver was lost and trying to find someone to help. One guy even mentioned that he wished he had never left his hole.

Finally, we arrived at our destination, which was an evacuation hospital consisting of large tents in a field. The people there were very surprised to see us. They had been told we would be there the following day, and the showers were not installed yet. Things got better, we were taken to a large tent that has a stove and cots, so we were able to get warm after our ride. They told us that the best they could do was to get hot water so we could wash, shave and change clothes. That was more than we had for a month. I can clearly remember how kind those men were to us. No doubt it was because they thought we were in trouble, but not like the unlucky ones they had been used to treating as they were brought in from the front. Under the conditions, it was a fine feeling to have someone show consideration, as basic as their help was. I washed as well as I could, shaved, dressed in a clean uniform and went to the tent and fell asleep on the following cot. It was warm and felt wonderful.
I awoke because my feet were hurting. Peeley looked at me and said  » I had the same problem, so did the others. Go outside where it’s cold « . When I left the tent, there were others standing in the snow who verified that the treatment had helped them. Returning to my folding cot, my attention was drawn to a guy who had  » the stage  » with some very funny stories. His accent was identical to the GI on the truck. I looked at Peeley, our eyes met and he nodded  » that’s the same one « . What a shock. That  » old man « , after shaving and washing the black from his face so you can see more than his eyes and mouth, was about eighteen years old. The Fountain of Youth was not at Elsenborn in January 1945.

Our group mounted the truck the next morning, after a fine rest in a heated tent. Everyone was happy and talking of the hot meals we had enjoyed, and the conversation was  » buzzing  » about our experiences. Looking around, I noted that there were individuals aboard the truck, not black-faced  » look-alikes » with the  » 1000 yard stare  » that had arrived the day before. The talk stopped, we had traveled far enough that we could hear our artillery firing. Our escape from reality was about to end. The existance and endurance ability of a truckload of dogfaces was about to start once more.

As we left the truck and walked out of Elsenborn, past the shattered church and last houses, to the junction where the 4.2 mortar crew was set up, past the tank and company CP to the draw where the knocked-out ambulance was, Peeley and I didn’t say anything. But, as I went back to my hole dug into the deep snow and Belgian soil, my gut muscles hardened and my ears strained for any strange sound, I was thinking : IT WAS NOT WORTH IT, BECAUSE I HAD TO COME BACK.