By the end of 1939, the US military forces totaled about 330.000 servicemen and women. That number gradually expanded over the war years and culminated to nearly 15 millions in 1945. Beside military equipment, vehicles and weapons, the task of the Quartermaster Corps was also to provide more basic supplies for the well being of the troops. Personal hygiene products. 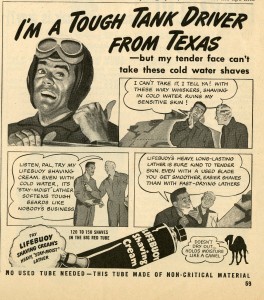 At the time, many companies had put out soaps, creams and other toiletry products for men. Barbasol and Burma Shave claimed to be the biggest companies around, but others like Colgate, Williams, Gilette, Omega or Johnson & Johnson  were largely commercialized. The beginning of World War II generated cooperation between US government and major corporations at an unprecedented level. If some of them became military contractors, the urgent need for massive personal care products allowed smaller brands to boost their production. Advertising based on the war effort and the support to the troops became frequent in newspapers, magazines and in the streets. Patriotism was unquestionable but it was also a business matter. After the Great Depression, the industry was obviously more than happy to supply the Armed Forces. It was a way to increase its public visibility, generate huge income and re-boost employment. 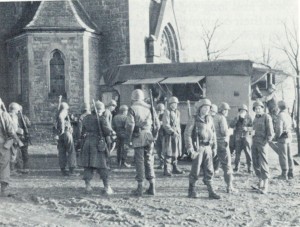 A PX truck of the American Red Cross stands in front of the church of Krinkelt, Belgium, in November 1944. Short break off the lines for those 99th Division soldiers and time to enjoy goodies, coffee and donuts.

The ratio front line soldier/rear echelon soldier is estimated to 1 for 5. If the latter had less trouble to access personal care, front line soldiers were dependent of what was available at a given time and what military operations allowed them to carry. Front lines was not necessarily meaning combat and when possible, the American Red Cross and Quartermaster Corps used to go up front with PX trucks to provide a number of goodies and vital supplies. Men rotated down the lines to enjoy a short break, purchase a little piece of home or improve their basic comfort. They also received parcels sent by their families or sweethearts. Those often contained vital supplies directly purchased in shops throughout the US. Civilian socks, women skin care, brillantine, fragranced soap and perfumes reached the front. 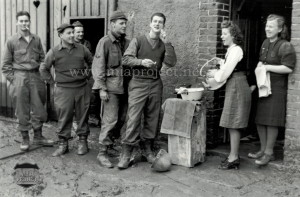 Brushless shaving cream tubes are frequent on battlefield. At the time it represented a modern way of shaving. Prior to that time, lather was produced from a bar, and was basically another form of soap. Shaving cream is a substance applied to the skin to facilitate removal of hair. It softens and moistens the skin and the hair, thus making shaving more comfortable and contributing to smoother skin. The advantages of using shaving cream are many, especially in a foxhole in a combat zone. According to 1944 Pulitzer Prize winner and noted military correspondent Ernie Pyle :

« More than a year ago I wrote an item about the numerous uses we’d found for the brushless shaving cream issued to frontline troops. Its virtues were legion. It was perfect for sun- and windburn, nurses shampooed their hair with it, it soothed fleabites and softened chapped hands and cracked fingers. And there at Anzio the soldiers discovered that if they massaged their feet with it once a day, it went a long way toward preventing the dreaded trench foot. It’s a shame somebody didn’t shave with it once in a while. » 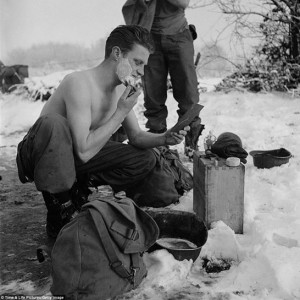 If body care and shaving was uneasy on the lines, when the Battle of the Bulge started, personal hygiene became secondary. Brutal and ferocious battles added to extreme winter conditions heightened the soldier’s misery and grime. Bearded and dirty soldiers became legions. To a certain extent, grime even became a ally against the bitter cold.

As J.R. McIlroy of Company F, 393rd Infantry, depicted it:  » … No matter how dirty or smelly our foxhole buddy was, we snuggled… The dirtier and greasier our uniform was,  the better it would turn water and snow… »

This article presents the most frequent brands and equipment recovered on the battlefield. 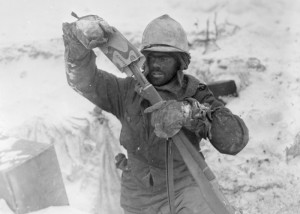 Bearded and dirty soldier of Company K, 393rd Infantry on the Elsenborn Ridge.