For the dogface, the world was what he could see from his foxhole. This article shows various equipment used by US servicemen on the front line. Things they carried in their pockets, Army issued or simply a piece from home, anything that helped to keep morale high and sustain horrors of war, cold, fear and misery. The war as it was seen from a foxhole.

As an introduction, here is Frank Kyser’s view from his foxhole.
Frank was a member of Company A, 324th Engineer Combat Battalion. On the fourth day of the battle of the Bulge, his company had withdrawn to a high ground overlooking the village of Wirtzfeld, Belgium. 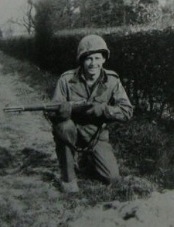 “... At dawn on the 20th, the artillery started coming in and we saw tanks coming out of the woods. The tanks kept coming and the German infantry followed behind. I had never seen so many Krauts together before. They got halfway to the valley and our artillery open up in back. The first rounds were overhead fire and that caused the tank commanders to “button up” – get down in the tank and close the hatch. The infantry started on the run to the valley and we started firing all along the line. You could tell by the tracers from our machine guns that we were laying it on. Our artillery was firing for all it was worth. It looked like the whole front on the other side of the valley exploded all at once. And then would explode again and again. Two tanks were burning, one was disabled, three or four turned around and were going back. The one disabled was giving hell to the 1st platoon with its cannon and machine gun. Wilson and McCune from the 1st platoon ran forward with a bazooka to get a better shot at the tank. McCune was cut down and killed but Wilson’s shot set the vehicle on fire. The boys from the 1st platoon got all the crew as they escaped. The infantry turned and retreated along with a lone tank. We fired at them all the way. It wasn’t long before their artillery started along with a lot of smoke shells. Then their tanks and infantry reappeared. I fired my rifle till the barrel got so hot that I was afraid the rounds would go off from the heat as they hit the chamber, without me pulling the trigger…”