The search for missing soldiers often brought 99th MIA Project members to a road known to 99th veterans as the “International Highway.” It was a large, black-topped road running north-south along the Belgian-German border, just in front of positions occupied by the 99th Infantry Division. 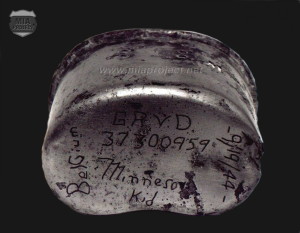 There was no match in the team’s database, and, at the time, online Federal records were just wishful thinking. It was thought the owner belonged to the 99th Division, and an article appeared in the Checkerboard, the 99th Division Association’s newspaper. The mess kit was sent to Dick Byers.

Few people had enough clout with the Veterans Administration to find a veteran with only a serial number and no name. Dick Byers mentioned the story to Barbara Tate, curator of the Ohio Military History Museum. She offered to help, having a good contact in the VA, someone who owed her a favor. Barbara was successful. We got the name. GRVD stood for Granville Roy Van Dusen. We sent a letter to his last known address in Coon Rapids, Minnesota. At first there was no reply, and we figured it was the end of the search.

Then came the biggest and most unbelievable coincidence of all. Granville Van Dusen had not lived in Coon Rapids, Minnesota, for years but still owned a house there. He had lost his tenant, so the house stood empty. He came down from Grand Rapids to check on his property. He looked in the mailbox for the first time in eight years and found the letter.

The Minnesota Kid was wounded for the fifth time on October 11, 1944, as a member of the 39th Infantry Regiment (9th Infantry Division). His unit was there on line when relieved by elements of the 99th Division. Granville and his wife, Lorraine, visited Dick Byers who returned the canteen cup to its original owner.

Lorraine died in 2005, and Granville passed away in January 2012 at age ninety-one.