Like curious prairie dogs, the mortar men looked out from their holes. The German artillery barrage had rolled westward and was now over the battalion headquarters. Lieutenant Lonnie O. Holloway led the Weapons Platoon of Company K, 393rd Infantry, and he was fully

aware the Germans were not wasting such an incredible amount of artillery ammunition for a simple wake-up call. The young lieutenant from Corpus Christi, Texas, urged his men to clear aside the tree branches brought down by the shelling and check their weapons. The three 60mm mortars and the two light machine guns were untouched as was their crews. In front of him, beyond a hillcrest, a milky glow suddenly washed over the sky. The Germans had illuminated the predawn darkness with search lights.

This was the prelude to a massive German attack that was about to hit most of the 99th Division front. For its part, the 3rd Battalion, 393rd Infantry was in position in a heavily forested sector along the Belgian-German border. Companies I and L were deep in the forest and away from the point of attack. But the unfortunate men of Company K were dug in astride a muddy trail that appeared on German battle maps as one of their main penetration routes to the west.

The phone rang. Second Platoon was calling. Over the staccato of rifle and BAR fire, the caller frantically requested mortar support. Swarms of German grenadiers were pushing forward. Holloway relayed fire missions to S/Sgt Arthur Hicks, his mortar section leader. The tubes immediately delivered shells on pre-established target areas. Other support requests soon reached Holloway. The fire deflection of his mortars grew larger and before long covered most of Company K’s front. The German attack was massive and concentrated on a muddy trail leading into the heart of the forest. The Second Platoon, dug in astride the trail, was wiped out in less than thirty minutes. First Platoon was also in a critical situation and the defensive line began to collapse. From their position at the bottom of the valley, Holloway and his men could see the survivors falling back downhill with German grenadiers on their heels.

PFC Thomas D. Price: « …Lou Gainey and I were on the right flank and Lt Holloway was in the second dugout to our left. The two .30 cal machine guns were on our left and a little forward towards the road. The 60mm mortars to the left and slightly to the rear… There was a complete tangle of tree tops and branches camouflaging the full length of our position along the road. Across it, the ground fell away into a shallow ravine and then continued to rise through the pine trees to a ridge that sloped downward to our left as it curved closer to the road on our far left, beyond our line of vision. The Germans first began to appear over the ridge to our left, then spreading to the right. They seemed to be coming straight down the hill through the trees… When a lot of them were committed, we opened fire with our M1’s and Cal.30 machine guns… »

The mortarmen quickly readjusted the inclination of the tubes and resume the fire with minimal propelling charges. The young lieutenant quickly realized the dire situation and stopped retreating troops to place them in his defensive line.

Pvt Willis Sellhorn : « …We reached the 4th platoon and Lt Holloway was setting a perimeter of defense around the mortars. He sent me up the trail to see if I could hold them off. I went up to where I had a view of the crest of the hill and waited. A line of infantry about a squad size came over the hill and I opened up with my BAR. A couple of magazines had them all down or into cover. I got back to the mortar position… »

The Germans were now so close that the tubes had reached their maximum elevation. The crew removed the bipods and continued to fire holding the tubes with blankets. Sgt Nello Bartolozzi was firing with his tube between his knees, feeding it with both hands. Holloway’s little Alamo stood up against the flood of German grenadiers and the mortar men repulsed several assaults on their position. The battle had reached a climax when a burst of machine gun fire stitched Holloway in the neck, instantly killing the young officer. The German attack died down and the grenadiers started to bypass the little bastion of resistance to move further west. S/Sgt Hicks took advantage of this lull and ordered a withdrawal. « …No Germans physically entered our mortar positions while I was there… remembered Art Hicks. « … I was in the same hole with Holloway when he was killed… Nothing could be done and his body was abandoned at the entrance of his command post… »

After the accidental recovery of Alphonse Sito in September 1988 (see Creepy Corner), Bill Warnock and Dick Byers were confident that a deliberate search for missing servicemen might yield results. Warnock compiled a list of 34 missing 99th Division soldiers and Byers published it in the Checkerboard, the 99th Infantry Division Association’s bulletin. Holloway was indeed in the list as missing of the 393rd Infantry but Warnock had no idea what company he served with. Over the last few years, Warnock had interviewed a large number of former members of company K and had assembled a large amount of information but Holloway’s name never came up. The first to react to the list was Curtis Amuedo, he was with Holloway when he was killed. Other K company veterans soon responded, Art Hicks, Nello Bartolozzi, Tom Price, all were direct witnesses and provided valuable information. Amuedo owned a geological consulting firm in Denver and maps were part of his livelihood. With Warnock, they determined the probable location of the mortar positions and informed Seel and Speder where to search for Holloway. Byers planned to visit Belgium for the dedication of a monument commemorating the 99th Division and he would provide all the information directly to the Belgians. Together they reconnoitered the place and indeed found a cluster of 18 holes, including three looking like mortar pits. At the time, it was the beginning of the hunting season and it was decided to come back with all the needed equipment at a later date.

Seel and Speder came back early November 1990 and after two days of search had collected quite an impressive amount of equipment. This included 60mm mortar rounds, cleaning kit

s for mortars, mortar containers and also personal belongings. Toothbrushes, shaving cream, K rations surfaced as well as rotted clothes and a mess kit belonging to Sgt Oscar Hillring, one of Holloway mortar squad leaders. The site was very encouraging but no remains had been located. At the end of the third day, a garbage pit was located in a little entrenchment behind the command post. It was filled with empty mortar containers. They were all removed and suddenly a rubber overshoe and a tibia appeared. Holloway had been found. His grave location suggested that the Germans had removed his body and stuffed it in the little trench behind the command post. Byers and Warnock were immediately notified as was Amuedo. The news of the recovery spread like wild fire among company K veterans. The only surviving family member of Holloway, his young sister, Sarah Holland, was still living in Corpus Christi.

The U.S. Army Memorial Affairs Activity Europe (USAMAA-E) was informed of the recovery and funeral director Mike Tocchetti came over from Frankfurt to take custody of the remains. They were transferred to the

Central Identification Laboratory in Hawaii for positive identification. Beside dog tags, officer’s crossed rifles insignia and a single 2nd Lieutenant bar were found on uniform shreds. In his billfold, a well readable ID card was also recovered. Identification should not last long.

Sarah Holland stayed in regular contact with veterans who served with her brother and attended every reunion. In September 1994, she joined a battlefield tour of the 99th Division and toured Belgium. Escorted by the Belgian searchers, she visited the mortar positions and the site where her brother was recovered.

In July 1995, on her way to attend the annual reunion of the 99th Division in Pittsburgh, Pennsylvania, she was critically injured in a car accident on the Ohio turnpike. She died from complications on October 6, 1995.

With the death of Sarah, the incredible story of the young lieutenant seemed to be over.   Indeed it was, until October 16, 2011.
That day, two young Dutch brothers, Gerard and Johan Overweg, were searching the battlefield and crossed the old mortar positions. They had no idea of what happened there before. At one of the gun pit, their detector picked up a tiny target and a small gold plated bracelet surfaced. The name didn’t ring a bell 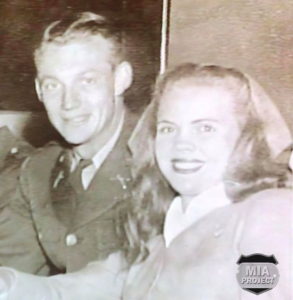 to the brothers, though, it read « L.O. Holloway ». The first name « Norma » was carved on the reverse side. Back at home, Gerard and Johan googled the name and immediately caught a number of links, including one for Bill Warnock’s book, « The Dead Of Winter ». The book describes the work of the MIA Project and one of the chapters is dedicated to the recovery of Holloway. For the young Dutch, their discovery was puzzling. They contacted Bill Warnock who in turn introduced them to Denise Holland, daughter of Sarah and niece of the lieutenant.
After the first contact, Gerard and Johan offered to return the bracelet. Denise suggested to come over to meet the brothers in the Netherlands and the MIA Project members at the recovery site.

On September 13, 2013, Denise and her husband Adam, the complete Overweg family and MIA Project members Seel and Speder walked to the grave site. After a solemn ceremony, Gerard presented the bracelet to Denise. It was an unexpected but happy conclusion to a long story.