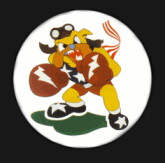 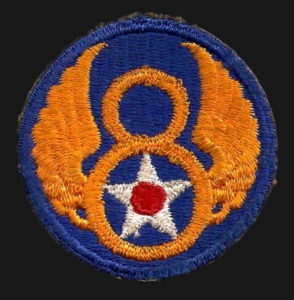 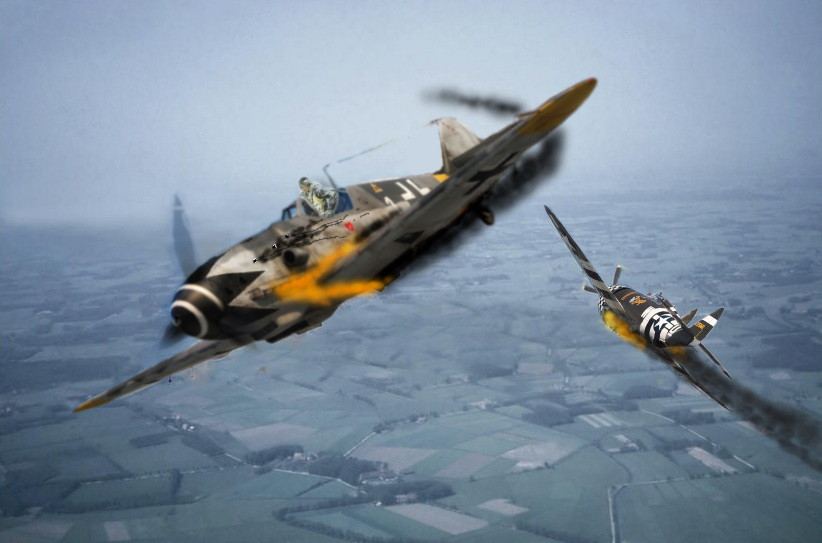 December 23, 1944 – Time 1215.
In the clear skies over the Bonn area, Germany, two P-47 Thunderbolts of the 56th Fighter Squadron were flying a reconnaissance mission. Grounded for several days due to bad weather conditions, the squadron had received the mission to patrol the area of Koblenz, Germany. 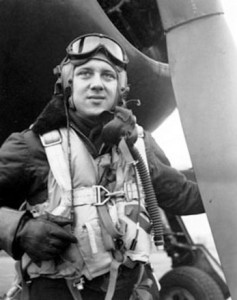 The German fighter headed straight to the second P-47 piloted by 2nd Lt Charles E. Carlson. The Me-109’s cannon rounds came streaking by the canopy like a string of glowing white golf balls. Armor-piercing incendiary rounds of Carlson P-47’s eight cal .50’s reached out to the Messerschmitt and staggered it, sparkling over the cowling of the onrushing fighter.

The German pilot still came on, face-to-face, in a deadly game of chicken. Still scoring hits, both pilots held the trigger down as the two planes came together. In the last split-second, the German pulled up and whipped over the top of the Thunderbolt.  As the German pilot bailed out of his smoking machine, he caught sight of a flaming torch slipping toward the ground. « … as I chandelled to the right… » continued 1Lt Fleming, « … I found my wingman and the enemy airplane afire. My wingman approximately 75 yards astern of the Me-109… »  2Lt Carlson and his burning « LM-M » coded P-47 slammed into the flat ground in a huge oily fireball 2 km south of the village of Buschhoven. There was no parachute.

Locals found scattered human remains as well as a billfold and a large piece of leather flying jacket next to the smoking crater. The mayor reported the crash to the Luftwaffe administration and the incident was closed. Despite post war investigations by the Grave Registration Service, the remains of the young Long Island, NY, resident were declared unrecoverable. He is since reported Missing In Action. 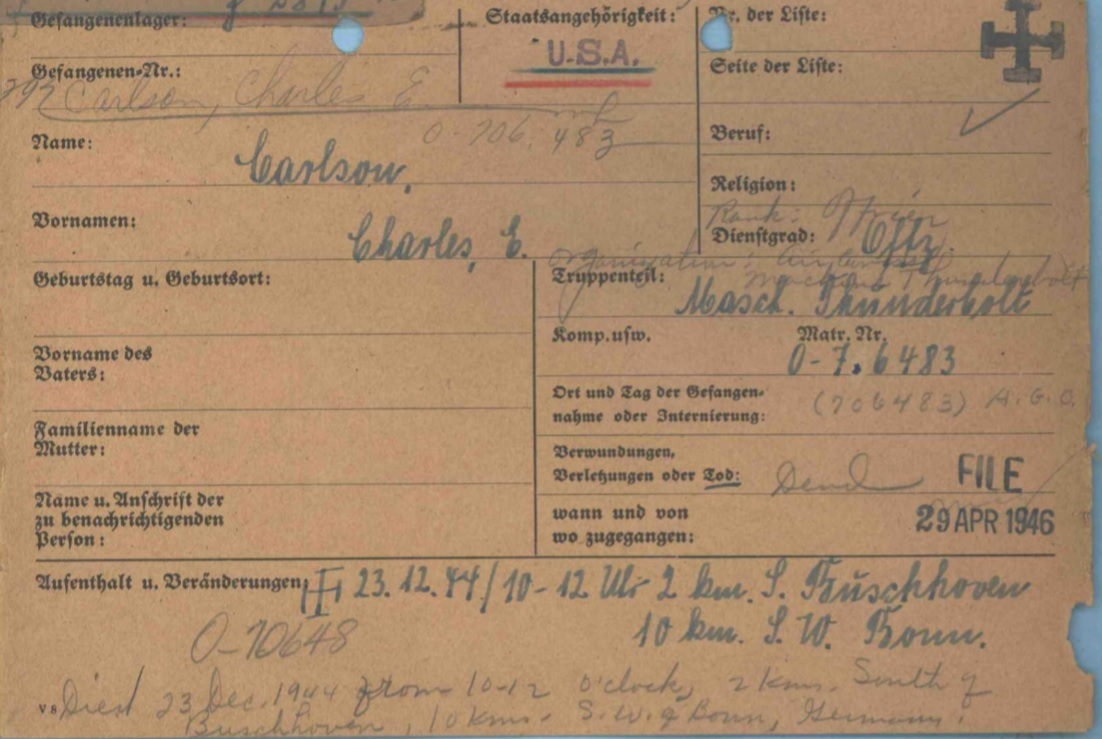 Original German administration card reporting the location of the crash, type of aircraft and the name of the pilot.

The Missing Air Crew Report (MACR) and the pilot’s Individual Deceased Personnel File (IDPF) were investigated in the late 1990’s by Wolfgang Meyer and Axel Paul, both members of the German historical society  « Arbeitsgemeinschaft Luftkriegsgeschichte Rhein / Mosel e.V » (Airwar Historical Society Rhine/Mosel). In 2006, conducted by chairman Axel Paul, members went to the site for further investigations. They met with Patrick Gniesmer, a local citizen, who had contacted them after he found the crater. Patrick also had recovered plane parts that matched with the MACR. The information was immediately forwarded to the Joint POW-MIA Accounting Command (JPAC). In 2007, JPAC briefly visited the site with the German historians to evaluate the possible success of an excavation. Over the following years, despite repeated requests, no recovery operation took place.

In 2015, JPAC merged to a new agency called DPAA. The acronym stands for Defense POW-MIA Accounting Command. The new agency adopted a new search policy based on knowledgeable local history groups. History Flight, a US non-profit organization with a serious background in MIA search and recoveries was selected to supervise a number of cases for DPAA. 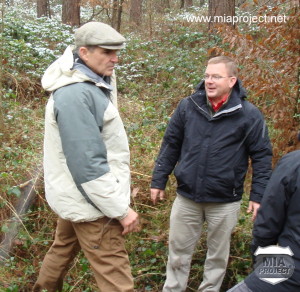 In January 2016, the German historical society contacted History Flight and the search for the P-47’s pilot was re-activated. Within the ensuing weeks, History Flight sent a team to do a site survey. They were accompanied by a cadaver dog trained to locate old human decomposition scents. On February 2, 2016, the excavation of the crater and its immediate surroundings began. The 99th MIA Project also joined the search effort to determine the boundary of the debris field and locate plane parts with metal detectors. It was determined that plane crashed from an east to west direction. Under the guidance of Dr. Heather Backo, PhD in anthropology and Hedy Justus, MSc in forensic and biological anthropology, five 4 by 4 meter units were determined with the crater as center.  Archaeological excavation was realized in the pre-established units and soil layers carefully screened. After 5 weeks of continuous hard work, despite difficult weather conditions, meaningful elements surfaced. The first osseous remains were recovered in the crater as well as life support equipment. Remnants of the pilot’s uniform in the form of leather jacket fragments, oxygen mask, a Lieutenant bar, fragments of shoes, a waist belt and a parachute buckles were also unearthed. The site was visited by DPAA commander, LtGen Mike Linnington and his European Director, Colonel Chris Forbes. 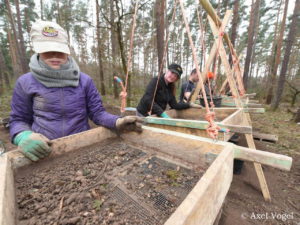 Dr Heather Backo (c) with helpers at a sceening station.

After the excavation of the different units, an additional area was determined in the debris field. In a radius of 8 meters from the crater center, soil layers were mechanically removed on 360 degrees. The arduous task of screening this large volume of dirt confirmed the east-west trajectory of the plane and released some more plane parts. It also revealed that life support equipment and human remains were all located in the crater. The screening lasted until May 17, 2016.

72 years after the end of WWII, another missing serviceman is back home thanks to the obstinate motivation of a group of local historians. 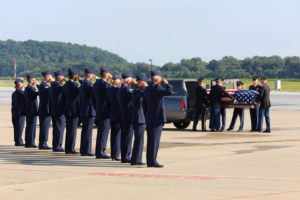 Fort Indiantown Gap National Cemetery, PA, was selected by the family as final resting place. The flight carrying Charles Carlson arrived at Atlanta, GA, on August 2, 2017, where a Delta Honor Guard transferred the flagged casket for the last flight home. At Harrisburg International Airport, family members and a US Air Force detachment were waiting for the long lost pilot. The flagged casket was solemnly carried to a hurse and transported to a funeral home.

On August 4, 2017, family members and friend gathered at Fort Indiantown Gap for the long awaited ceremony. They were joined by actual 62nd Squadron members, today based at Luke Air Force Base in Arizona. Charles Carlson received well deserved full military honors. As the Honor Guard of the Pennsylvania National Guard was folding the flag, four F-35A Lightning II’s of the 62nd Fighter Squadron flew over in Missing Man Formation. A last and thrilling tribute to their fallen squadron mate. 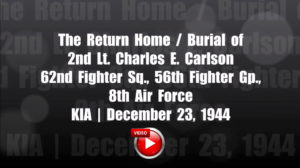