The German planners seemed to have overlooked the tactical significance of the Elsenborn ridge as a place where the Americans may take a defensive stand against the I.SS Panzerkorps. After four days of stubborn resistance in the forest along the border, 2nd and 99th Division soldiers retreated west and took new positions on the ridge. Their heroic stand had bought enough time for the First US Army to organize itself on the high ground. Two battle hardened American divisions, the 1st and 9th Infantry Divisions, were hastily engaged to complete the defense. The 9th Division held positions on the northern portion of the ridge, in the vicinity of Kalterherberg . Next in line, to the south, in the open terrain, were the remains of the 99th and 2nd Divisions. The 1st Division closed the southern end of the Elsenborn ridge between Büllingen and Bütgenbach. 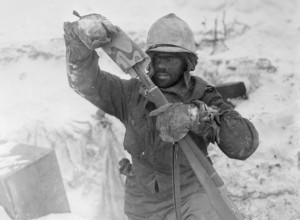 German probes and heavy attacks hit different sections of that front but they were all beaten of by artillery. During the remainder of December, the front stabilized and the major concern became the terrible winter conditions. Icy wind and masses of snow whipped Elsenborn ridge during what became one of the coldest winter of the century. On both sides, life was extremely miserable and, after the guns, the cold began taking its toll. Despite discouraging weather conditions, US troops continued to harass the Germans with raiding patrols throughout January. The defense of the Elsenborn ridge will remain in History as “the Little Round Top” of the Battle of the Bulge.

The visit will bring you to several key points, from foxholes in the Kalterherberg Forest to the Domaine of Bütgenbach where the 1st Infantry Division Memorial marks the southern limit of the perimeter. The Ridge, today a shooting range of Camp Elsenborn, is not accessible to the public for obvious security reasons. However, the viewpoint of Elsenbüchel is within reach and offers an open view of the north side of the ridge. At the same location stands a monument erected in remembrance of the countless dead and wounded soldiers and the civilian victims of the battle for the Elsenborn Ridge. Optional is a visit of Camp Elsenborn and its museum to conclude the day.