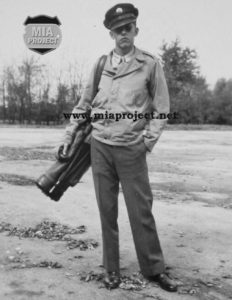 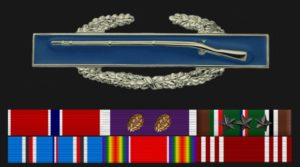 Vernon Edward Swanson was born on December 5, 1923 in StLouis, Minnesota.

ASTPer, he was transferred to Company C, 395th Infantry as basic infantryman when the program was stopped late 1943. He went through all major battles fought by the 99th  Division and was three times wounded in action.

Member of the 99th Infantry Division Association, he had attended most of the association conventions and served on the board of directors. He joined the MIA Project since its early beginning. Vern was immediately enthusiastic about the project. His company had five missing men. One of them was his foxhole buddy, Jack Beckwith. Vern was an eyewitness to his death on “88 Hill.” He made numerous trips to Belgium in support of the search effort. After Dick Byers passed away, Vern became the MIA Project team leader .

He was interviewed by Tom Brokaw, who included Swanson’s story in his book, « The Greatest Generation. » Vern also published his own book, « Upfront with Charlie Company, A Combat History of Company C, » in 1997. He graduated from Iowa State Engineering School and received an MBA from the University of Chicago. He was a resident of the village of Deerfield, Illinois, for more than 50 years, and had served as trustee of the village for 30 years, from 1975 to 2005. He founded Deerfield Boy Scout Troop 150 and was himself an Eagle Scout.

Vern passed away on June 25, 2006 of a heart attack at his fishing cabin in Canada.