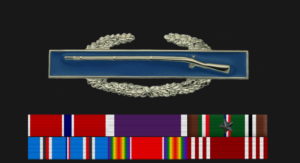 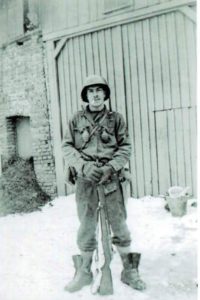 Charles “Chuck” Harrington was born in Harrington, DE on January 11, 1922 and was raised in Media PA. He graduated from Media High School in 1940 and was drafted in 1942. After boot camp, he was transferred to the 99th Infantry Division and assigned to the Mine platoon, Anti Tank Company of the 395th Infantry. Chuck fought all the major battles of his Regiment and was wounded after crossing the Remagen Bridge. He was evacuated and returned to the States on 23 April, 1945. He was officially discharged on July 13, 1945 at the Woodrow Wilson General Hospital in Staunton, VA.

volunteer fire fighter at Rose Tree Fire Co. He worked for Dupont Company for 37 years. He later opened and managed  a plant in DeLisle, MS where he retired. Chuck and his wife Marion raised 4 boys and one daughter.