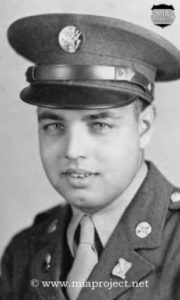 Grant Yager, age 94, of Sandusky, MI, passed away Tuesday, October 15, 2013 at McKenzie Memorial Hospital in Sandusky. He was born November 2, 1918 in Minden City, the son of the late Albert and Pearl (Sample) Yager. He was a lifelong area resident and 1936 graduate of Sandusky High School.
Grant served in the Army for three years during WWII. He was captured in Büllingen on December 16, 1944 by the leading elements of Kampgruppe Peiper. He spent 4-1/2 months in captivity. A life member of the VFW, American Legion, DAV and X-POW, and the Veterans Trust Fund. Grant married Helen Hoff on September 14, 1946 in Sandusky.
He and his brother Lee were business partners at Yager Auto Parts since 1946 after taking over for their dad who started the business in 1931.Grant was very active in the community serving as Past President of the Sandusky Lions Club, on the Sandusky City Council, on the Sandusky Fire Department for twenty-two years, Chief for six years, serving on the Board Of Directors for Michigan Auto Parts Association, the Michigan Dairy Queen Owners and the 99th Infantry Division.
He made numerous trips back to Belgium and was a fervent supporter of the 99th Division MIA Project.